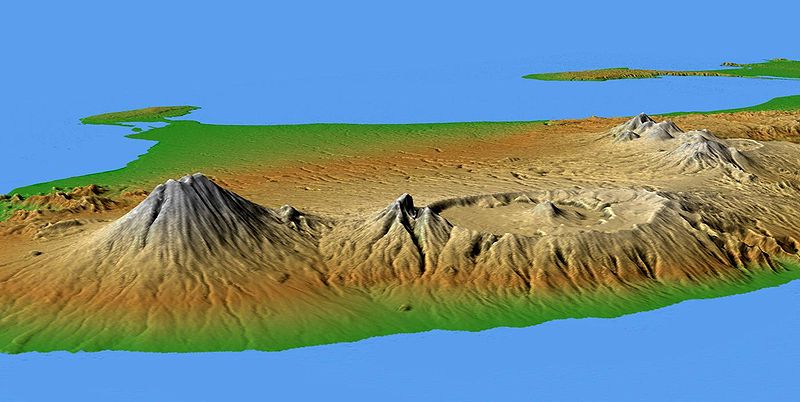 This perspective view shows the major volcanic group of Bali, one 13,000 islands comprising the nation of Indonesia. The conical mountain to the left is Gunung Agung, at 3,148 meters (10,308 feet) the highest point on Bali and an object of great significance in Balinese religion and culture. Agung underwent a major eruption in 1963 after more than 100 years of dormancy, resulting in the loss of over 1,000 lives.

In the center is the complex structure of Batur volcano, showing a caldera (volcanic crater) left over from a massive catastrophic eruption about 30,000 years ago. Judging from the total volume of the outer crater and the volcano, that once lay above it, approximately 140 cubic kilometers(33.4 cubic miles) of material must have been produced by this eruption, making it one of the largest known volcanic events on Earth. Batur is still active and has erupted at least 22 times since the 1800's.

Elevation data used in this image were acquired by the Shuttle Radar Topography Mission aboard the Space Shuttle Endeavour, launched on Feb. 11, 2000. SRTM used the same radar instrument that comprised the Spaceborne Imaging Radar-C/X-Band Synthetic Aperture Radar (SIR-C/X-SAR) that flew twice on the Space Shuttle Endeavour in 1994. SRTM was designed to collect 3-D measurements of the Earth's surface. To collect the 3-D data, engineers added a 60-meter (approximately 200-foot) mast, installed additional C-band and X-band antennas, and improved tracking and navigation devices. The mission is a cooperative project between NASA, the National Geospatial-Intelligence Agency (NGA) of the U.S. Department of Defense and the German and Italian space agencies. It is managed by NASA's Jet Propulsion Laboratory, Pasadena, Calif., for NASA's Earth Science Enterprise, Washington, D.C.

nb: Originally uploaded by me, Jack Merridew, as w:User:Davenbelle, on en:wp: